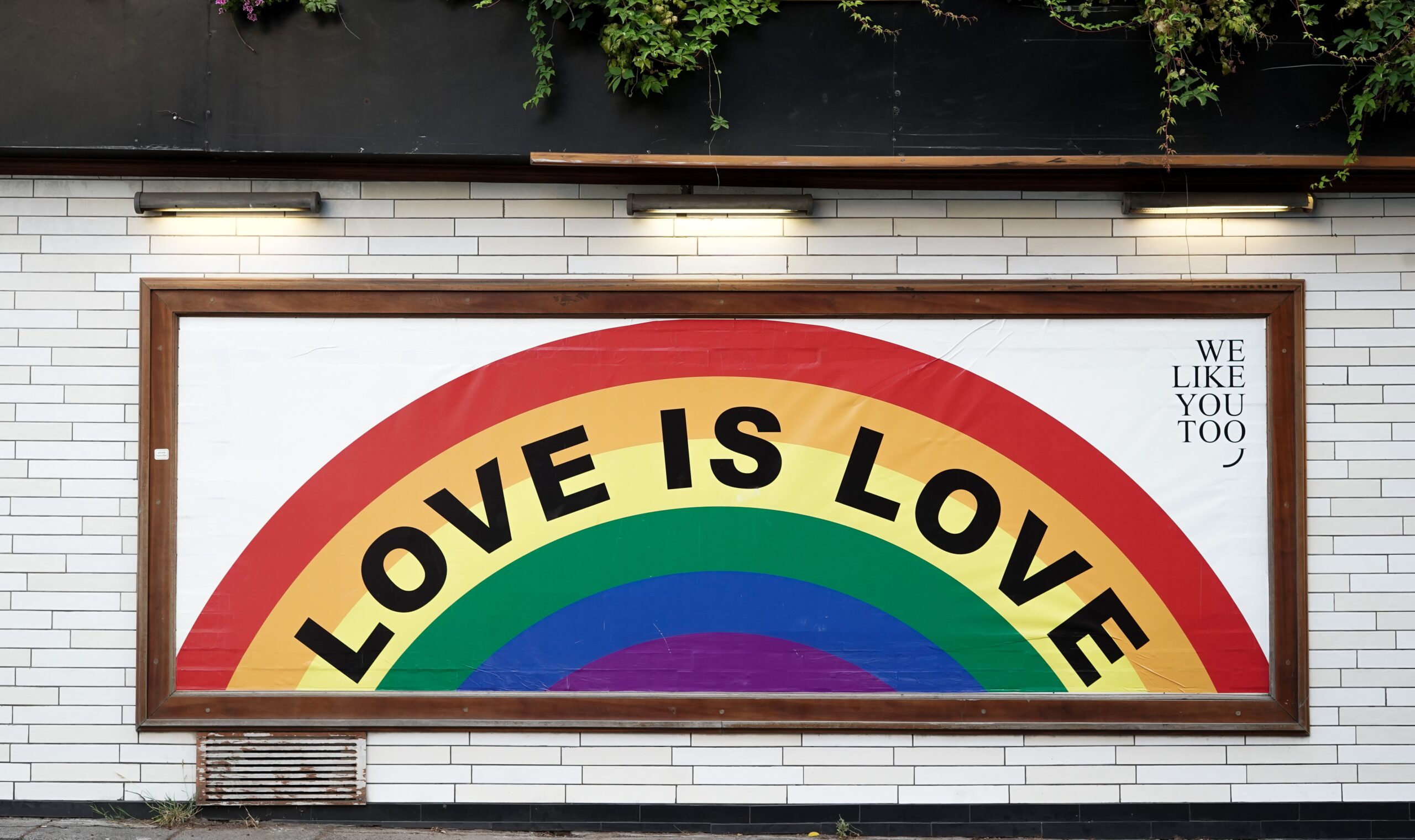 What the Bible Says About Homosexuality

When we take a look around at our culture, we see hatred for God, a desire for the lust of the flesh, the lust of the eyes, and the pride of life (1 John 2:16). So, it’s no surprise that a culture that does not promote or upload a Biblical worldview, would celebrate the very acts that Scripture condones.

When we dive into Scripture, we see that it has a clear stance on the topic of homosexuality.

1. Scripture makes it clear that homosexuality is not God’s intention.

God’s intention when He created humans in His image and likeness was for man and woman to be joined together and become one. This was man’s original design.

Therefore a man shall leave his father and mother and be joined to his wife, and they shall become one flesh.

Marriage is honorable among all, and the bed undefiled; but fornicators and adulterers God will judge.

God’s original design for mankind was man and woman.

The Bible tells us that when Sodom and Gomorrah practiced homosexuality, God brought judgment and destruction upon that city.

In Genesis, we can see that clearly displayed.

Now before they lay down, the men of the city, the men of Sodom, both old and young, all the people from every quarter, surrounded the house. And they called to Lot and said to him, “Where are the men who came to you tonight? Bring them out to us that we may know them carnally.”

Now, this was not the only behavior that caused the destruction of this city, but it was one that the Bible cared to mention.

In fact, Jude chapter 1 and 2 Peter 2 give us further insight as to why they were judged.

As Sodom and Gomorrah, and the cities around them in a similar manner to these, having given themselves over to sexual immorality and gone after strange flesh, are set forth as an example, suffering the vengeance of eternal fire.

And turning the cities of Sodom and Gomorrah into ashes, condemned them to destruction, making them an example to those who afterward would live ungodly.

Now, when we take a look at this in our day and age, we see that homosexuality can also bring about a form of physical judgment experienced in the physical bodies of those who take practice this.

For instance, statistics show that “Compared with heterosexual men, MSM [men who sleep with men] evidenced greater all-cause mortality. Approximately 13% of MSM died from HIV-related causes compared with 0.1% of men reporting only female partners…Further, recently released statistics from the Centers for Disease Control and Prevention indicate that the rate of new HIV diagnoses among MSM is more than 44 times that of heterosexual men…These findings suggest that men with minority sexual orientation may experience elevated risk for premature death from multiple causes.”1

“Two large random sexuality surveys in 1994–one in the USA and the other in Britain–yielded results consistent with a median age of death for homosexuals of less than 50 years… Evidence [was] consistent with previous findings suggesting that homosexual activity may be associated with a lifespan shortened by 20 to 30 years.”2

These are just a few of the examples of a form of judgment that is being released on those that take part in this lifestyle.

3. It is condemned as an abomination

In our culture, this is celebrated. People are encouraged to express their love in the way that they desire and there are even parades to celebrate same-sex love. However, when we look at Scripture, it defines it very differently. It calls it an abomination.

You shall not lie with a male as with a woman. It is an abomination.

If a man lies with a male as he lies with a woman, both of them have committed an abomination. They shall surely be put to death. Their blood shall be upon them.

The Bible prohibits having sex with seven kinds of people:

It is not man, but God, who has put these limitations on us as His creation.

We have the option to rebel against His commands, but if we want to live within His blessing and we want to please God, this is an area that must we must conform our minds to.

4. Homosexuality is rooted in fallen nature.

This practice is considered vile and shameful in the New Testament.

For this reason God gave them up to vile passions. For even their women exchanged the natural use for what is against nature. Likewise also the men, leaving the natural use of the woman, burned in their lust for one another, men with men committing what is shameful, and receiving in themselves the penalty of their error which was due.

Paul says that God gave them up to vile passions. Paul tells us that this desire is going contrary to man’s natural design. In fact, as you continue to read the book of Romans, you’ll see that when we choose we suppress the truth because of our ungodliness, we exchange it for a lie.

At this point, the Bible says that God gives us up to our passions. He doesn’t give up on us, but He allows us to become prisoners of our passions and desires, and now it’s the urges and desires within us that are the driving force of our actions.

The idea here goes back to worship. If we go back to the garden of Eden, we see this painted very clearly. When the devil removed Adam and Eve’s view of God as their Lord, He was able to make them doubt God’s goodness and not value His command.

When God is not the Lord of someone’s life, they are left with the huge task of redefining good and evil for themselves, because God’s standards are no longer their standards.

His Word is no longer the absolute truth in their eyes. It’s at this point, that human cravings, desires, and impulses begin to drive them to define, what is morally good and what is evil in their eyes, disregarding God and His Word.

Don’t allow your biology to dictate your theology.

Culture has taken it upon itself to make love the god that is worshiped. And as long as we have that belief, we will always submit our biology to our cravings.

5. Practicing homosexuals will not inherit the kingdom of God.

Scripture confronts every single one of us. That is why it is such a powerful Book. It has the power to change our lives by removing things in us that do not belong.

People who practice a homosexual lifestyle will often say, “I can’t change, I was just born this way.”

Regardless of what any of us grew up doing or believing, one truth is clear, the Bible tells us that we must be born again (John 3:3).

Do you not know that the unrighteous will not inherit the kingdom of God? Do not be deceived. Neither fornicators, nor idolaters, nor adulterers, nor homosexuals, nor sodomites,

Knowing this: that the law is not made for a righteous person, but for the lawless and insubordinate, for the ungodly and for sinners, for the unholy and profane, for murderers of fathers and murderers of mothers, for manslayers, for fornicators, for sodomites, for kidnappers, for liars, for perjurers, and if there is any other thing that is contrary to sound doctrine.

Christians identify with Christ and uphold the truth of the Bible as a standard for their lives.

They don’t let their issues become their identity. You can be a Christian that’s struggling with homosexual thoughts just as you can be a Christian and struggle with pornography. However, when you begin to live that lifestyle and justify it by saying that it’s just who you are, then you’re living contrary to what Scripture teaches us to be true.

Now, if you’re an unbeliever, what I’m saying does not apply to you because you have not made Jesus the Lord of your life, meaning that you don’t submit to God’s rules because He is not your Lord, you are. One day we’ll all have to give account to God for our actions. Today, you could get right with God through His Son Jesus Christ.

Holiness is our standard. It’s not about targeting one sin and trying to convert those who are in that lifestyle. Instead, our aim is to live holy just as He is.

A few paragraphs above, I mentioned verse 10 of 1 Corinthians 6, where Paul is addressing the sinners, thieves, and people living out their sinful nature. But I wanted to tie in verse 11.

Homosexuality is not a sin that God cannot forgive, redeem, and sanctify from. There is no sin too large that cannot be washed away by God’s mercy and love through the sacrifice of Jesus.

How Can Someone Change?

It comes down to one simple thing:

Who will you worship? Who will set the rules for your life?