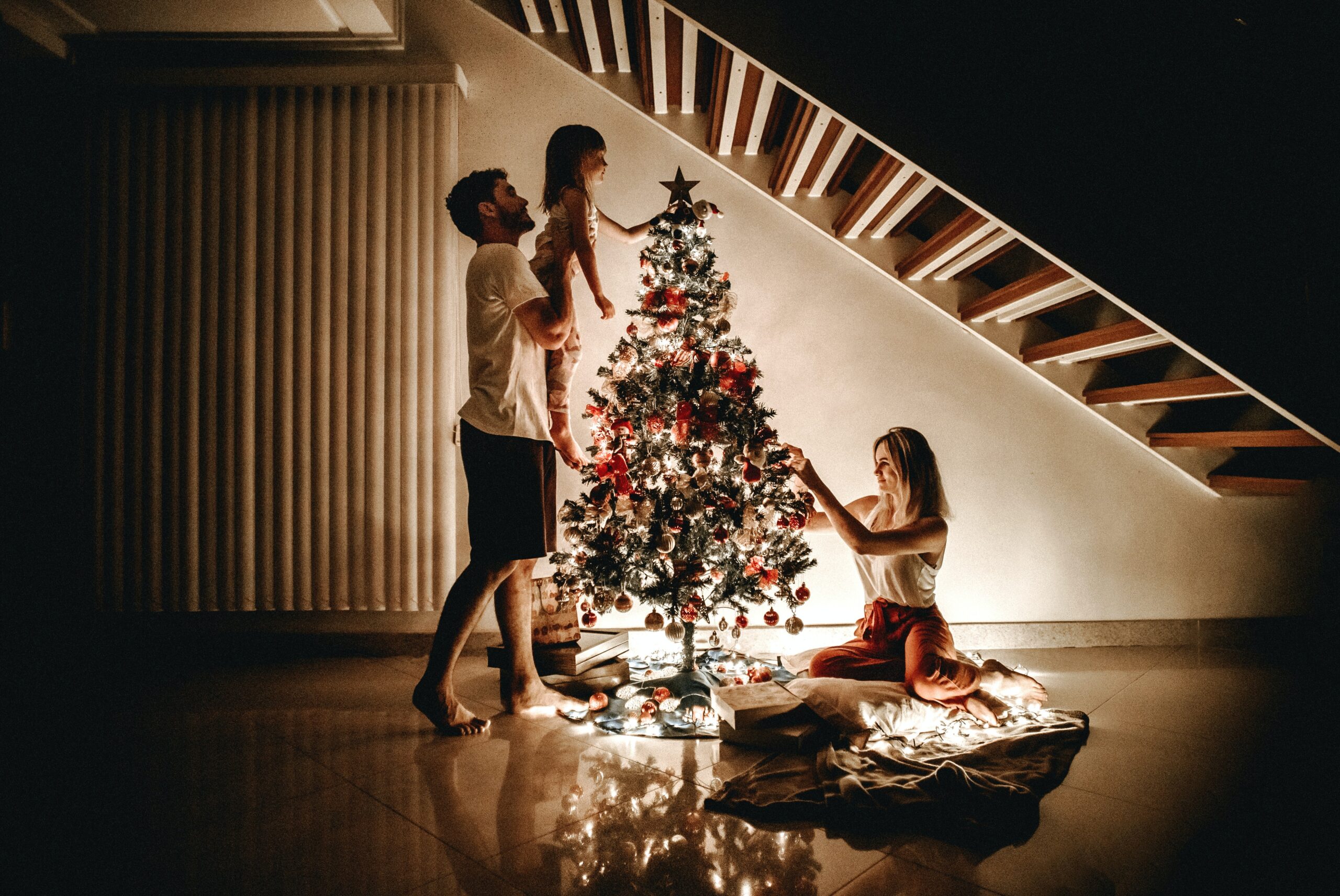 Is Christmas a pagan holiday involving trees and Santa? As we are nearing Christmas Day, lets discuss the origins of Christmas and why some Christians believe it shouldn’t be celebrated.

There is a lot of paganism that is involved during the holidays. For example, when addressing Christmas, we see that it derives from ancient Rome. Saturnalia is an ancient Roman festival and holiday in honor of the god, Saturn, held 12/17-12/24.  A time of feasting, role reversals, free speech, gift-giving and revelry. December 25 was the Christianizing of the dies solis invicti nati (“day of the birth of the unconquered sun”), a popular holiday in the Roman Empire that celebrated the winter solstice as a symbol of the resurgence of the sun, the casting away of winter and the heralding of the rebirth of spring and summer.

The first official mention of December 25 as a holiday that honored Jesus’s birth, appears in an early Roman calendar from AD 336.

Sometimes, the meaning of the words, symbols and traditions should be interpreted more by its current application than its origins. For example, the swastika was a symbol of good fortune for thousands of years, but it would be foolish to put that symbol on your door, because it has a different representation now. In the same way, Christmas had different pagan origins but the meaning no longer remains the same.

The important difference to note here is that although they both originated in pagan cultures, Halloween is evil in origin and is still associated with darkness, demons, death, and witchcraft till this day. It’s part of the kingdom of darkness and Christians should not be involved in such a dark holiday. Christmas on the other hand, now represents the celebration of the birth of Jesus Christ. If celebrating Christmas is pagan, then so is gathering on Sunday to worship. Do you know that Sunday is named after a pagan god and so are the other days of the week? Yet as Christians we don’t celebrate a pagan god on Sunday. The initial meaning of the names of the days of the week has nothing to do with our current activities. For example, if you are wearing Nike, the shoe brand, it doesn’t mean you are worshiping the goddess of victory, which the company was named after. In the same way, you can choose to not celebrate Christmas because of its pagan origin, or you can choose to celebrate it because of what it represents today–the birth of the Son of God, Jesus Christ.

At that time, Christians would be more likely to celebrate somebody’s death than a birthday. We see that the early church celebrated Jesus’s death. In fact, Jesus even told us to remember His death, but the Bible doesn’t put emphasis on remembering His birth.

One of the reasons why Christmas was not upheld by early Christians is in the 4th century is because there were controversies over the divinity of Christ. During that time, the doctrine of the incarnation of Christ was introduced–the affirmation that the Word became flesh. However, Christmas now emphasizes the humanity of Christ, and the fact that Jesus was born of a Virgin as it reads it the Old Testament.

It’s true that He wasn’t born on the 25th, but Jesus’s birth is a very special event for both Christians and the world. The actual birthday of Jesus is unknown, and there is an assumption that it was around March or early Spring. The reasoning behind that is because when Jesus was born, the shepherds were watching their flocks at night, which tells us that it wasn’t winter. The shepherds didn’t herd the sheep during the winter.

What we do know is that Jesus’s birth was divine. It was announced by angels to shepherds, acknowledged by wise men, and it was a fulfillment of the Old Testament prophesies.

Jesus came to live among us, and He brought salvation and redemption to people.

5. There is no commandment in the Bible.

There isn’t a single commandment in the Bible telling us to celebrate the birth of Jesus. And, the apostles and the early church didn’t celebrate it either. It’s a big deal now in our culture but it’s not even mentioned at all in the Bible. Although that’s all true, the Bible also doesn’t prohibit us from celebrating His birth. Therefore, Christmas is not something that Christians must avoid.

Therefore, whether you eat or drink, or whatever you do, do all to the glory of God.

It’s true that Christmas for many people in the world is just another excuse to get drunk, party, leave work, skip school, spend money, overeat etc. The modern world has hijacked the sacred holiday meaning and made it into a commercial nightmare.

What then? Only that in every way, whether in pretense or in truth, Christ is preached; and in this I rejoice, yes, and will rejoice.

But for us as Christians, it’s an excuse to exalt Jesus. It’s great to hear Christian Christmas carols in the malls, hear songs about Jesus like “Mary did you know” or “Fall on your knees” everywhere you go. At least one time in the year, unbelievers have a chance to hear about the beautiful name of Jesus.

There are some extra-biblical traditions that serve and help us to advance the mission of Jesus Christ, as long as it is not in conflict with core Bible doctrine.

The presence and use of certain elements like bells, candles and decorations is in no way a return to paganism. The tradition of using Christmas trees began with the Protestant Christians in Germany around 16th century. The star on the tree was used to remember the star followed by the wisemen. The angel topped on a tree represented the angels who appeared to shepherds on the night of Jesus’s birth.

Some people say that cutting down Christmas trees is prohibited according to Jeremiah 10:1-16 or Isaiah 44, but these verses tell the people of Israel to not to be involved in idolatry.

What About Santa Claus?

The idea of Santa coming down the chimney was developed from an old Norse legend. The Norse God, Odin, would enter homes via chimneys during the Winter Solstice. The idea of Santa in the U.S. was developed around the 19th century by Coca-Cola and American cartoonist, Thomas Nast, who created a modern version of Santa Claus.

Much of the tradition of Santa, however, can be attributed to St. Nicholas. St. Nicholas was a Turkish bishop back in the 4th century, famous for his kindness and generosity, particularly towards children. One story tells of a poor man with three daughters. In those days a young woman’s father had to offer prospective husbands something of value—a dowry. Mysteriously, on three different occasions, a bag of gold appeared in their home-providing the needed dowries. The bags of gold, tossed through an open window, is said to have landed in stockings or shoes left before the fire to dry. This led to the custom of children hanging stockings or putting out shoes, eagerly awaiting gifts from Saint Nicholas.

Under the Roman Emperor Diocletian, who ruthlessly persecuted Christians, Bishop Nicholas suffered for his faith, was exiled and imprisoned. After his release, Nicholas attended the Council of Nicaea in AD 325. His death on December 6th gave rise to St. Nicholas’s day.

When it comes to Christmas, it’s your personal conviction whether to uphold it or not.

As a Christian, we can use this time to talk about Jesus’s birth and the amazing Christians who lived before us and were generous, sacrificial, and even had to go through persecution for the cause of Christ.

Will I be celebrating Christmas?

You bet I will. Because to me it’s a joyful time. And even though Jesus wasn’t born on December 25th, we will gather with our family and we will praise God for sending us Jesus. And I’m going to enjoy some Christmas carols and have a wonderful time remembering that God has sent His Son to save me and to save us.